To me, the stereotypical grandmother is the grandmother that embodies laughter & smiles.  This is how I remember my father's mother (... Grandma Z...).

Ahhh, Grandma Z.  When I was a kid, she kept the best-tasting grape juice in her fridge.  There will never be corn chowder that can top hers, and -- for some mysterious reason -- no one can make pickled eggs better than hers.

Like da zimdog, she was a human of simple taste & natural intelligence.  When I asked my dad what level of education she completed, he told me she had no official education beyond the 8th grade.  She was raised on a farm in Carsonville, PA, and couldn't find transportation to Halifax (... the nearest town with a high school...).

So, instead of learning from the structure curriculum of a high school, she learned about existence from Nature.  The family farm included many animals that she would've known on a personal basis (... in addition to being familiar with the apple orchard & the plot of Christmas trees...).

Last June 7th (... on her 83rd birthday...), I spoke with Grandma Z. on the phone.  That conversation came just two weeks after my grandfather died.  At the time, she was also recovering from cancer treatment (... not to mention, the trauma of the cancer itself...).

As I paced around my backyard -- phone in hand (... asking her about her birthday dinner, and waiting for the right time to ask her about the various other things that might be on her mind...) -- I couldn't mistake hearing the bright side of life resonating in her responses.  Despite being beat down by the recent threat of her own death---(... & the very-real death of her soul mate...)---she still put forth the effort of speaking with positive consideration....

In other words, she loved the Zimmermans (... even those that did something unkind...).  When an aunt-in-law would divorce from the family, Grandma Z. would cover that aunt-in-law's face in family photos (... with a Mr. Yuk sticker...).  Even her most vindictive actions were expressed with the humor of love (... which only made her easier to love...).

In doing so, Grandma Z. was living proof that people can establish mutual respect.  The Golden Rule was neither mantra nor catch phrase to her....

When she met Russell Lloyd Zimmerman at a party one evening, they connected over the coincidence of sharing the Zimmerman surname.  The way my mom puts it, my grandparents then researched to make sure there would be no mutant Zimmermans.  When it was decided that genetic abnormalities would not be an issue, the Zimmerman-Zimmerman union proceeded from there....

Yesterday---(... conversing with my father...)---I learned all sorts of things about Grandma Z. that I never knew while she was alive (... i.e. her admiration for the poetry of Robert Frost, her musical ability on piano, etc...).

Immediately, I had no trouble connecting with these previously unknown aspects of her reality.   I could easily imagine her helping my dad with his homework... (... a cosmic connection I share as a tutor...).  Likewise, my dad spoke of her wise ways with such profound remembrance that it wasn't difficult for me to remember her anew in similar ways.

Regardless of any neurosis or cynicism I develop in this life, I can easily say -- without hesitation or regret -- that I will always remember Grandma Z. as an angel....

In figuring out how to end this eulogy, I reached for the book she & Pop sent me for Christmas one year.  It's an awesome hardcover copy of The Wizard of Oz (... with gilded pages, an attached ribbon bookmark, & excellent glossy color illustrations...).

All she wrote facing the title page was:

To Cory
From    Grandma
and
Grandpa Zimmerman

For her, what counted was the thought of giving a special gift.  (Did I mention she was humble...?)  For example, I don't ever remember her asking me if I wanted a quilt.  Instead, she just made me one & gave it to me (... with simple, unconditional love...).

(I sleep under that quilt every night....)

I suppose that's the difference between the psyches of our respective generations.  Whereas my generation just knows to expect gifts at certain times of the year, her generation was a kindhearted generation that asked for very little in return.  As a result, Grandma Z. sought to encounter life's rewards by giving gifts....

Because of her selfless giving, I never quite knew what to get her in return.  That's why I usually just gave her my love.

She was truly a cosmic woman, and I will miss her kind spirit for the rest of my life (... until that point in time when our spirits are reunited...).

a year of Morgan Freeman

Em & I have decided to embark on a yearly tradition; we will watch the filmography for each year's recipient of the Cecil B. DeMille Award....

The 2012 recipient is Morgan Freeman, whose movies I generally love; however, we are off to a surprisingly rocky start:

On a three-tier scale of "up, sideways, or down," Em & I gave both movies a rating of sideways....

Currently, we are watching:

I have tons more pics of Crater Lake to look at, but these two stood out right away.... 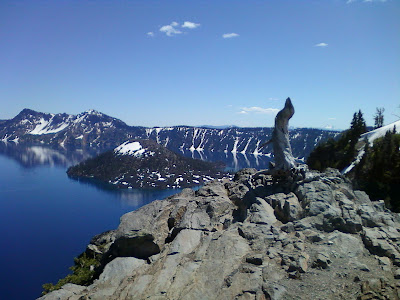 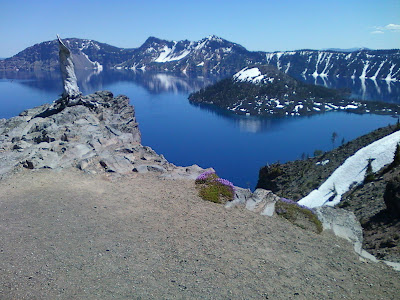 More once the Holidays calm down...?
Posted by zimdog at 04:50 No comments:

I woke up before dawn & watched the end of a total lunar eclipse....

But---(first)---I made breakfast & grabbed my laptop; up in the studio, I got the heater running....

When I opened the studio window to check on the eclipse---(from a higher vantage point than the yard, where I'd previously been watching)---dawn was presenting more... (... as was light cloud-cover...,)... all along the Western horizon...).

(For more on Carlsonian Residue, open the Post-Notes in a New Tab/Window....)

And, then...?
The eclipse became spotty in the clouds... (... which were now slightly more front-lit by sunlight...).

When the section of Moon-sliver burst through the edge of the clouds, a distant sea bird appeared... (... as if from the Moon jewel...).

The clouds did some more eclipsing of the still-red Moon... (... & I doubted if this lunar eclipse would remain visible for much longer... (... before the Sun would dilute its power... (... & the eventual turn of the Earth would wash it from view...))).

(For this, the author is deeply grateful to a writerly friend, Ian McCarthy... (... who came up with the idea of starting a writer's group...).)

Thus---(in trading chapters with a writer)---the author received constructive comments on the first half of The (Eventual) Case...!

(In exchange, I offered comments on chapters from Ian's work-in-progress... (... a pulp-fiction novel called Bloody Money...).)

(In August, Ian moved halfway across the country; nevertheless, the author solaces in this absence....)

Luckily, we live in a technological age that permits collaboration via e-mail....

I couldn't believe what I saw in Ross today: the Lord-&-Savior Jesus Christ in the form of a talking action figure....

That is the Lord's Prayer you hear (en Espan~ol)!

In other news---(regarding shameless capitalizms)---I checked every pair of shoes at Ross -- to see where they were made. Of course, every pair was made in China. So, I bought the pair that I saw as being "Most Ironically Made-in-China...."

Happy shopping, y'all!
Posted by zimdog at 02:06 No comments:

Hemp for Liberty (a petition)

(in case it gets pulled from the site, I'm posting it here:)

This petition pertains to so many issues---(most of them, in fact)---but the main issue seems to be the right of self-sustenance that is being denied by the unconstitutional Federal prohibition of one of Nature's most versatile industrial resource: hemp....

The prohibition of hemp began in 1937, when marijuana was outlawed (after years & years of bad press). The common misconception about this Federal prohibition is that We, the People, were somehow being protected by these laws. This drug prohibition was, however, just a cover for the "dirty" business being done behind the scenes....

As we continue seeing today, the will of the People was "decided" by special interests that did not wish to continue competing with the very competitive, very versatile hemp plant. Thus---(via its close relationship with its propagandized cousin plant, marijuana)---hemp ceased to be a viable option for the People of the United States of America to use in their endeavors of making paper, textiles, diesel fuels, etc....

Before the People's trade in hemp was unnecessarily outlawed, major U.S. companies---(i.e. Ford Motor Company)---began researching & developing technologies that would utilize byproducts of the readily available, versatile plant: Cannabis sativa (hence the need for competitors of hemp to squash the competition in any way they could).

There is no easy way around it: if We wish to continue reducing Our dependence on foreign oil & foreign goods, We need to find Our own ways of producing energy & goods made here in the U.S.A.

This nation once shared a valuable relationship with hemp & marijuana. While the People may not be ready to reconsider marijuana, We can safely consider hemp as We once did: a vegetable with many, many uses!

With so much talk in recent years about stimulating the economy, it seems only logical for the People of this nation to begin investing in resources that will localize Our nation's ability to create sustainable energy. This is why the re-legalization of hemp as an industrial resource seems primarily to be an issue of civil rights. Initially, the prohibition of the plant was done not in the interests of the People, but in the interests of corporations that stood to lose out to a plant that had proven its worth in so many ways.
Posted by zimdog at 01:27 No comments: