Ever wonder why you exist? Ask Kafka

Some days seem less useful than others. Other days seem stranger than some. When I get to the end of a day that seems both useless and strange, I know I've had a good one. The days spent toiling for the company or tidying up the apartment somehow don't have the same effect as days spent advancing my own chaos-- or at least not advancing my order.

Today, I slept in (which is becoming a habit of late, and one that seems like it will continue until school starts in the fall). Then I woke up, ate breakfast, walked the dogs, watched TV and went for a destructive lunch of wings and beer. Then I went there and there, accomplishing nothing major, had a few beers at a friend's, where I started watching a movie that always makes me think. Later I watched TV, ate dinner, and finished watching the movie, thinking even more by that point (since I spent the interim letting my subconscious review the first half).

Had I fully itemized my day, not only would this post have been even more boring, but I would only have highlighted the lack of substance in my day. Had today been a workday for me, instead I could've itemized the things accomplished on company time. Even though I
would've been paid, I still would've accomplished the same thing today: minor impacts making no influence on the state of existence. I suppose we've tricked ourselves into thinking we matter, or that our daily dealings matter.

I'm not saying I feel one way or another about existence. In fact, I rather like focusing on the mundane nature of the human state, because that's what connects me to the dull rumble of the churning Universe. Still, days like today remind me that it's okay to exist, no matter what that existence consists of. I just like those moments when I remember that guilty laziness is no worse than proud success. They're both spent in reality.

It's hard to find, but I recommend the 1991 film, Kafka. That's what put me here arguing in favor of my own existence.
Posted by zimdog at 01:26 2 comments:

Possible worlds theory basically suggests that works of literature act as pnaws (possible non-actualizable worlds). Theorists view works of fiction as constructs of our actual world, which, of course, they are. However, some theorists (such as Umberto Eco with theater and Mihai Spariosu with literature) discusses the ways in which fictional constructs can work backward from a pnaw to influence the actual world. For example, a writer tells the tale of some poor character who suffers greatly the injustices of a fictional world. In our actual world, readers come to recognize these injustices, and begin looking for ways to prevent them in the actual world. In this way, authors can and do shape the future of the world by actualizing possible future worlds that might not have been actualized otherwise.

Well, naturally, the same could be true of blogs. If people didn't blog, then the readers of those blogs might not have the significant effect on the world that they do. In the process, they are actualizing possible future blogospheres. In every instant, only one blogosphere can be actualized from the infinite possibilities, and right now, you are experiencing one unique blogosphere taking shape. And again right now. And again right now... ad infinitum et nauseum.

Alright, so the last part about possible blogospheres was semi-sarcastic, but the rest of the post about being really stoked about possible worlds theory... yo, that shit has already been way actualized, biatch!!!
Posted by zimdog at 02:37 1 comment:

The simplest reason for not blogging since the last entry was because our Internet connection wasn't working for a while. My wife and I were both too busy to make the call. I was also busy because I'm now 1.33 semesters closer to getting a master's, and I dun got married too. See? 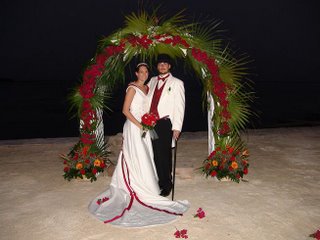 Yep, Emily and I have been married now for 4 months. It seems like longer, but I'm sure that's because now I'm married and stuff.
Posted by zimdog at 10:49 No comments: