The day after the last day of summer class, I was on a plane for San Diego to do some work with a writer friend of mine. I don't have many pictures of San Diego--just this one, an answer to the iconic question, "Is there a Ralph's around here?" 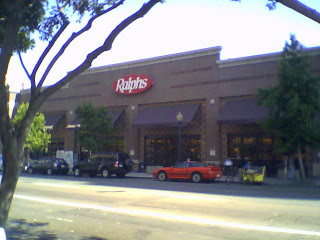 Also in San Diego, I saw Sicko and got thoroughly pissed, sitting there in the theater with what felt like strep throat, pondering a trip to Tijuana for some antibiotics because my country's health care system is all about assholes at the top gettin' rich.

From San Diego, I flew to San Francisco to meet Emily for the annual APA (American Psychological Association) convention, which was crazy, because there were protesters out front all week, claiming APA has sent psychologists to Guantanamo Bay to aid in terrorist interrogations. Apparently, some folks associated with APA exacted methods of mental torture or something. 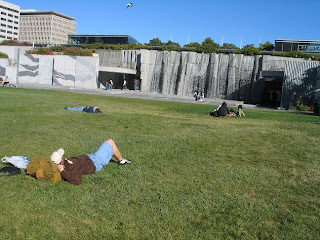 It was the kind of place you only find in cities that truly care about their citizens. People sat scattered about, playing guitars or chatting with lovers, just enjoying the day.
Posted by zimdog at 00:09 1 comment: