Mid-May, I was West-Coastin' in San Diego and took an afternoon visit at the Museum of Contemporary Art San Diego (the Kettner St. location; they have others). Well, as luck would have it (and as part of what I can only assume is an ongoing thang called the CERCA SERIES), the MCASD was presenting the art of "Encinitas-based sculptor William Feeney [who] turns assembly techniques and themes associated with the building trades towards self-reflective and conceptual ends." I had never heard of William Feeney before, and I'm willing to bet my car that you haven't either, but now I'll remember his name. 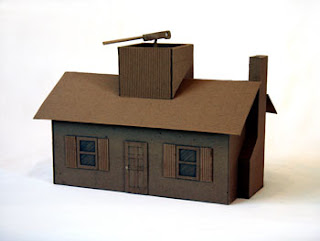 Son of a motherf#@^er, when I saw this next one, I think I almost peed myself:

Big Snooz - I couldn't find the work's details online, but it's made out of Igloo cooler material, and it even says 'big snooz' on the lid
(Image stolen from http://entertainment.signonsandiego.com/profiles/events/feeney)

The first room was all Feeney's work, and each piece in that room elicited some reaction. If it wasn't at least a chuckle, then it was some form of nostalgia or deep thought. One of my favorites (not pictured here) was a plastic baby doll wrapped entirely in Band-Aids. It was called Baby Owwee.

And then, as if the Feeney exhibit wasn't enough, I found this monstrosity in the back room next to the bathroom: 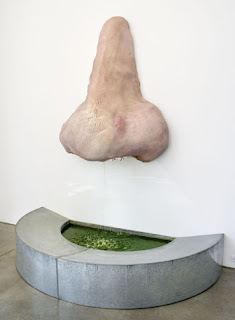 To blame for this masterpiece are The Art Guys based in Houston, Texas. I wish I could recreate the mini-essay/explanation for The Big Sneeze, because it was pure satirical genius. Basically, these two dudes from Texas have used artistic snobbery as a reason to create things like this. Every 20-or-so minutes, speakers would play the sound of a person inhaling panicked drags of air, followed soon after by gushing green water. Folks, this is art in its purest form: art that appeals to the common man. I stayed to watch it a second time.

For more on The Art Guys, visit http://www.theartguys.com/homebody.html
Unfortunately, I couldn't find any sites dedicated to William Feeney.

The MCASD's permanent upstairs exhibit was lots of fun too. If you're in San Diego, I recommend spending the $5-10 and ~60 minutes it will take you to enjoy this museum.