I just finished reading a friend's months-old post regarding an unexpected rise in the reading of literary fiction. The news is not quite so good for poetry. Man, I don't get it. Not only is poetry fun to write, it's also fun to read. There are no strings attached, no commitments. You just read and react. There's nothing to figure out.

While reading her post, I thought about my own recent experiences with poetry. My degree is in fiction writing, but poetry's always been a good friend. Just last month I sent some poems out to a contest and a journal in hopes of a bite. We'll see.

I also sent, late in December, a letter to Stephen Colbert regarding the Siamese Scats that won me an honorable mention in the 2007 Wergle Flomp. I'm surprised they made it that far, given a vast majority of society's judgmental attitude toward anything fecal. Were the poo-ems juvenile toilet humor? In ways, yes. But they are a little more than just poo poo humor. If read aloud and given some consideration, it is possible to find a certain amount of thoughtful poesy therein. My hope in sending them to Colbert was that they might actually gain further recognition via someone who seems capable of considering toilet humor for something more.

Well, it's been quite some time since I sent the letter, so I am facing facts--especially after reading my friend's post about literary reading habits. I think it's time to archive the letter in my blog, because it won't likely meet exposure any other way. And so I present an original letter entitled, "On Becoming Poet Colbereate."

Until your show became a conduit for global success, I had no idea how important I was to myself. Yes, the intoxicating promise of the Colbert Bump has the potential to seize us all... even a humble man such as meeself. And so now, in meek tone, I write to you on the matter of why I should be named Poet Colberteate. I offer up as evidence the enclosed Siamese-twin poems, “Sca-rat-ska-bat-tale: A Movement” and “Movement Number Two: A Scatastrophe.” Read aloud, these poems conjure the simplexity of an everyday verse that could resound loudly throughout the Colbert Nation.

At the end of this sentence, you will find the appropriate meta-textual time-space gap that facilitates the reading of the enclosed poems...

... so now that you understand the importance of the Siamese Scats, you see how truthfully they harness the vulgaris hominum via the vox populi. The moral, too, is clear: semper ubi sub ubi. (Et illa est verba.)

The truthiness of the matter is, the Siamese Scats should earn me the prestigious title of Poet Colberteate because the “honorable mention” dealt thus far has only insulted my precious Siamese Scats. On the day of their penning, these poems were handed down directly by the purveyor of all things natural, the Almighty Poet Himself, Sir Henry Godsworth Longdong. In the golden light of this budding revisionist history, surely my heavenly droppings glow worthy of the American literary canon. Unfortunately, getting them there requires more than the peristalsis of everyday life... unless....

Enter the American media syndicate. Heck, if Rush Limbaugh can flush his daily verbal toilet with the Clear Channel, why should my divine defecations not undergo nationally-syndicated passage via Viacom? I await your reply, sir::: zimdoggie@gmail.com, or 954.###.####.

P.S. If nothing else, please issue the Wergle Flomp judges a stern Wag of Your Finger for me, or perhaps some “swimming lessons,” iykwim.
Posted by zimdog at 15:24 1 comment:

The most monster strawberry I have ever seen. I bought the package just so I could bring it home and eat it. 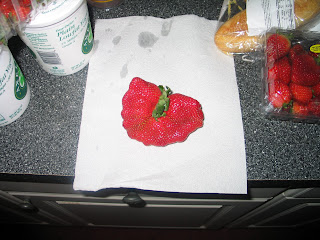 with others for scale 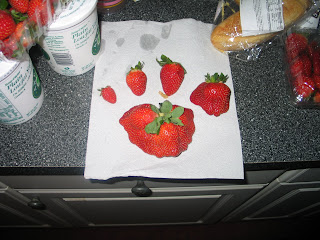 This one's just a little guy (from a different package): 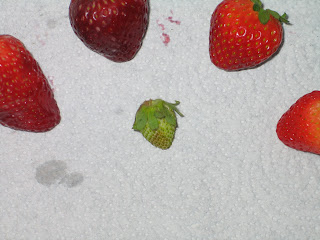 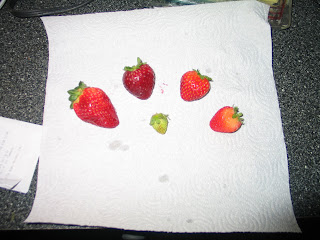