To dispel some of the myth surrounding Sunshine State voters, I share with you now Obama's deep understanding of the important Floridian vote: 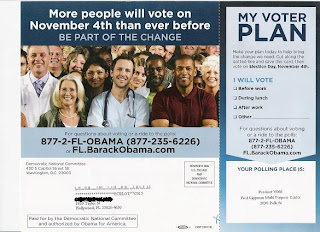 When I read the words "MY VOTER PLAN," I assume that means I'll have spaces to jot notes about the state and local amendments. Not so. In case you can't read them, the flyer asks me to plan my vote by checking one of the boxes:

So, basically, I'm a Floridian heartbeat. I know this because my vote-able heart beats with glee when I cast my eyes upon the other side of the flier: 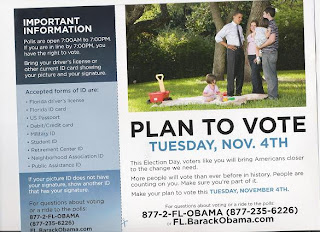 Cant'cha just feel the chipper birds singing the sunny-shade tune of Obama's day out with a perfect nuclear family?

Don't get me wrong. Neither McCain nor Palin is an option. I'm only wondering whether I should feel insulted by Obama or terrified by American expectations. These sorts of mailers smell like wasted money to me. Do candidates still deem this sort of bullshit necessary, or worse yet, is this the clincher for some Floridians?

Of course now I'm talking about those Floridians whose voter plans consist of checking a box so they can remember when they might be able to fit the foundation of democracy into their work schedule. Let's see. Do I wake up early, vote instead of eating, or get home late?

And what of the "Other" box? To tell the truth, I was considering voting Nader--or "not voting" as the sound-bytten mass public calls it. Maybe Barack Obama believes so strongly in democracy that he wants me to write in another candidate there, or jot some notes on amendments, etc. Given the theft of 2000, I'd me more inclined to believe this Obama flyer was dispersed by a radical covert branch of the conspiring evangelical Republicans of Florida, and they included the "Other" choice and blank line so heathens like me will realize that not voting is an option too.

I actually considered all this until Emily checked today's voice mail messages. We missed a call from Matt Damon, who contacted us on behalf of Barack Obama's Florida Campaign for Change. He wants us to vote Obama too, because "the issues are too important to sit this one out." Now I figure maybe I can check the "Other" box and write in the blank line next to it: Preferably conscious, but not required, as long as I vote for Barack Obama so Nader doesn't steal another one for the evangelicals.
Posted by zimdog at 18:40 6 comments:

I am convinced the academy is sucking the life out of me. I just told Emily today that I feel like a degree in creative writing is actually making me less creative. Just look at the lack of snazzy metaphors and e-prime verbage thus far in this entry.

In the last month, how many blog postings have gone undone, despite the strong desire to rant and rave on some topic? Must finish thesis, that thing for which I have no time because I teach (only) two freshman composition classes. Must finish degree before I know whether or not I can be a writer. Although I suppose if I were a true writer, I'd say fuck the stupid degree and just write right now. (Still, I feel this process of getting a master's is teaching me how to compile a large project, which probably counts for something.)