Hot air in the cold night

On the 23rd, my family and I went to visit some long-time family friends, the Dingles. Earnie and Dian Dingle used to flag and work turns at auto races with my mom. Now, they focus their time on hot-air ballooning. Every year around Christmas time, they invite a bunch of people to their place for a balloon glow, where they put the whole thing together and light up the stack in a stationary position. Well, the winter Pa weather often prevents the full-on glow. This year, the wind wasn't too bad, but the ground was too damp to lay the balloon out and fill it.

In lieu of a full-on glow, instead they brought the basket out and fired the burner up into the air. Here's Earnie getting ready to do so: 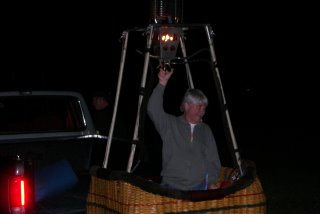 Check out that stream of burningness: 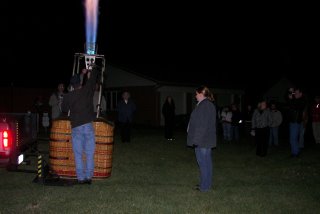 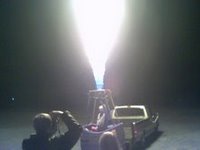 Like moths to a candle, we all crowded around and went, "Oooooo. Warrmmm." 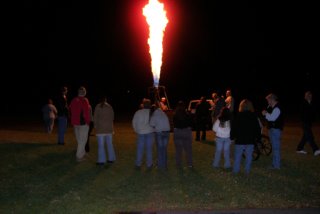 When Earnie really fired the burner good, he created a hybrid day-night sphere all the way out to a treeline maybe 200 yards away. Quite awe-inspiring. Here, my dad (far left), the Witmers (center), and a Witmer-in-law (far right) bathe in the warmth and light radiating from the massive bursts of fire: 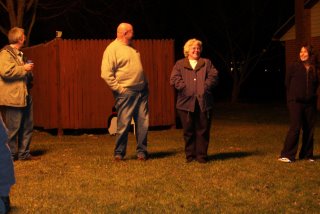 In the end though, the evening was an occasion for us to sit around, shoot the bull, and eat/drink ourselves silly. Here the Grays (center; also long-time family friends who still work at auto races) do the sitting around: 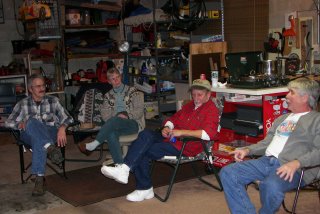 In the next picture, my mom shoots the bull while Emily contemplates another Wheat Thin with dip. Behind them are two growlers of some of the fine beer Harrisburg's own breweries have to offer: Troegs Mad Elf, and something hoppy from the Appalachian Brewing Company: 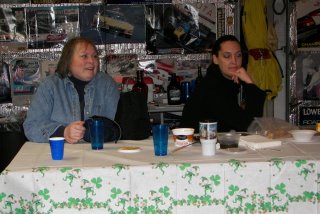 Also, in both pictures, you can see racing posters hanging on the wall--evidence of the exciting pasts of all these old farts. Not that I can talk though. In the end, I became the life of the party by looking at balloon glow pictures on my cell phone, and sending them to Earnie and Dian.

Okay, so maybe I'm not cut out for this regular blogging thang. How about I just promise to post when I do?

The semester's over now, which is why I actually made it here to my chew toy to do some chewin'. I'm not suggesting anything, but the spring semester may accommodate more toy-chewing. I am no longer a GTA. I'm staying on at the University writing center, but I think I'd like to take some time off from teaching for a while. I will definitely teach again someday...when I get to decide the entire sequence and syllabus. As it is though, I am entrusted with the duty of instructing composition for 22 students, but I'm given a selection of readings to pick from, and told how to teach the process of writing. There's a lot more to college writing than making academic arguments. When I teach again, my sequence, in addition to the academic argument, will include other types of writing (i.e. creative, opinion, research).

At any rate, only working 10 hours per week should allow more room in my schedule for my own work. I'm at the point where my thesis proposal is in sight, so I should have more of it done than I actually do.
Also, my classes for the spring have me really excited:

Good ol' reliable coursework. When all else irks me, I can always count on classes to cheer me up. After the spring, I'll only need one more writing workshop, but I know I'll take more classes than that--just for poops and laughters.
Posted by zimdog at 18:07 No comments: